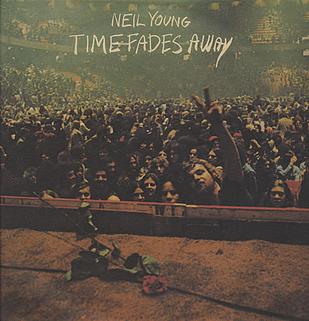 Following the success of Harvest, Neil embarked on his first big stadium tour. Had it been anyone else, the audiences would have enjoyed all the hits they knew and loved. Instead, Neil and the fractured Stray Gators tore their way through a pile of unfamiliar songs. The performances were ragged every night and Neil quickly lost the rest of his voice, but the recordings included on Time Fades Away show the urgency and absolute dedication to the moment. The tarnished picture on the cover shows an ocean of shaking hands; faced with this view show after show, Neil was starting to feel surrounded. Some of the songs reflect this.
After a few seconds of ambience, the title track is a country stomper that bashes along with Neil and Ben Keith yelling the best they can. He goes alone to the piano for the gentle, loping “Journey Through The Past”, which would have been more than welcome on the album of the same name. David Crosby helps out with “Yonder Stands The Sinner”, a performance that’s just this side of silly, while the rocking “L.A.” is a fairly blatant wish for the whole town to get swallowed up by the ocean. “Love In Mind” (solo on piano and recorded at the same 1971 show as “The Needle And The Damage Done” from Harvest) has clumsy notes and lyrics about religion, but ends the side nicely.
Side two contains only three songs, but he makes the most of the time allotted. “Don’t Be Denied” is an autobiography of sorts, with a distinctive riff and characteristic rhythm. Over several verses he talks about his troubled childhood, his first ventures into music and his view of the music business without sounding mawkish. “The Bridge” is the weakest of the piano tunes here, not least because his voice is absolutely shot, but it’s still a pleasant detour before the final tour de force. “Last Dance” is still a mystery, helped out by Crosby and Graham Nash, culminating in a standoff between Neil and both the unnamed antagonist and the audience. He sounds absolutely spent as the album ends; look at that cover shot again.
Time Fades Away remains a necessary artifact, and was long out of print despite various threats. Unlike Journey Through The Past, it’s indispensable for figuring out what he was about and where he was going. Well into the millennium, it wasn’t available on CD, so we held onto our precious vinyl copies. In 2017 it finally surfaced on streaming sites and some legal download services, as well as part of a pricey “Original Release Series” box set curated by Neil himself, first on vinyl only, and eventually on CD. Now it is finally possible for listeners to fill in the ongoing puzzle. (Still at large is a ramshackle pillage through “Last Trip To Tulsa”, as performed with the full band and released on the flip of the “Time Fades Away” single.)