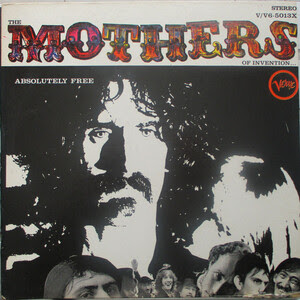 The Mothers had already changed since Freak Out!, having gained dedicated players in the sax and keyboard departments, and bolstering Jimmy Carl Black on drums with the more seasoned Billy Mundi. Absolutely Free was recorded over a four-day stretch, with its release delayed by arguments over the artwork. Frank felt the libretto was necessary to explain each of the elements in the album, each side of which was designated its own “oratorio”. At the very least, being able to read along would not only help people get all the words, but mostly be able to figure out where one song started and another ended without staring at their turntables.
A longtime live staple, “Plastic People” is far removed from its origins as “Louie Louie” with new lyrics. The track is, well, orchestrated, with the kinds of stops and starts (and seemingly improvised interjections) that would become a hallmark of his concerts. (The opening LBJ imitation came a full year before the Electric Flag used it on their first album.) Once that’s out of the way “The Duke Of Prunes” suite comes from an early orchestral composition, here given lyrics that skewer whatever romance might have been conjured by the melody. (To drive it home further, Frank insists on singing along with and thereby goading Ray Collins, who he considered an excellent R&B singer, into self-mockery.) The “Call Any Vegetable” suite follows, twice as long with an even more extended freak-out section pitting Frank’s guitar against Bunk Gardner’s soprano sax. Both contain buried references to Stravinsky, Holst and other composers.
After a side worth of songs about food, side two continues the derision as stated in “Plastic People”. “America Drinks” goes out of its way to be melodic and fight it simultaneously. “Status Back Baby” revives the pimply teenage subject matter from the first album, with some excellent changes, quotes from a pep rally, and a truly fantastic guitar solo. There’s a smooth transition into “Uncle Bernie’s Farm”, the ugliness of the “plasticity” disguised by the vocal delivery. Some overt “conceptual continuity” (the idea put forth that everything Frank Zappa did was connected somehow) appears with “Son Of Suzy Creamcheese”, a rhythmically intricate number. But the one that gets all the attention is “Brown Shoes Don’t Make It”. A horror movie disguised as a novelty song, it runs the musical gamut through vaudeville and TV commercials, nailing suburban hypocrisy and suggesting that every so-called pillar of the community harbors unclean thoughts about his daughters. Orchestral instruments play extremely modern music (not unlike what Brian Wilson was trying to do across town with Smile) and everybody gets a chance to weigh in. “America Drinks & Goes Home” presents a catchier version of the song that opened the side, a cocktail piano (and a cash register) tinkling away underneath a vo-de-oh-doh delivery sliding back and forth across the stereo picture as a brawl slowly escalates in the background. (The Stones would end up their next two albums this way, mimicking a band saying good night at the end of a gig.)
Absolutely Free is something of a transitional album; not as directly catchy as Freak Out!, it takes time for the challenging music to take hold. And before too long, he’d moved on to his next big ideas anyway. Of his earliest work, it’s possibly the most overlooked.
In an interesting move that unfortunately didn’t become standard, the CD version of Absolutely Free included the original single versions of “Big Leg Emma” and “Why Don’tcha Do Me Right?” Both pretty harmless, silly songs—though the latter sports a tasty distorto riff towards the end—they provide a break between what used to be sides one and two. It’s one of the few Zappa singles that got appended as bonus tracks.