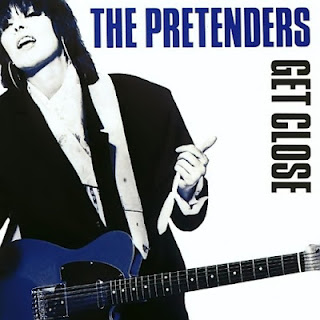 Learning To Crawl celebrated Chrissie Hynde’s determination to rock alongside life as a mother. Within a year’s time she married Jim Kerr of Simple Minds, and had another child with him. His band had its biggest-ever success with a song thrust upon them for a John Hughes film, before releasing an album that rode that hit’s coattails. Once Upon A Time sported a slick, synthy sound, thanks to producers Jimmy Iovine and Bob Clearmountain. That same team could get the bulk of the blame for the prettified Get Close, but as Chrissie seemed to think it okay, it really is her fault.
For starters, the tight unit that propelled most of Learning To Crawl only appears on the closing track, a synth-heavy cover of Hendrix’s “Room Full Of Mirrors”. The ten songs prior to that deliver edgeless pop from a revolving set of musicians, anchored by guitarist Robbie McIntosh and the drummer from Haircut 100.
Only the first single, “Don’t Get Me Wrong”, can remotely be called catchy. The other radio hits were “My Baby” (dripping with sentimentality and including a rather obvious sound effect in a cheering audience) and “Hymn To Her”, a celebration of (take your pick) the Goddess, womynhood, somebody’s mother or all of the above. If not for her wavering voice, there’s little connection to the bite of the first two albums. “Chill Factor” tries to speak for the gender as well, but is a pale copy of her own version of “Thin Line Between Love And Hate”.
Particularly painful are the slightly political rants “Dance!” and “How Much Did You Get For Your Soul?”, which pit ordinary R&B riffs to ill-advised club beats, complete with dated keyboards and vocal modulations. “I Remember You” and “Tradition Of Love” beg to be skipped, but the biggest head-scratcher is “Light Of The Moon”, written by Bowie cohort Carlos Alomar and two modern jazz performers, one of whom can’t even spell Chrissie’s name right on the credits section of his website.
Chrissie is the only Pretender shown on the front cover of Get Close, and when the 1990 model arrived, the name of the “band” was its own joke. Martin Chambers would eventually return to the fold, and every couple of years she’ll put out a new album under the Pretenders name. (Malcolm Foster, who played bass on Learning To Crawl, hasn’t been heard from since.) Still, Chrissie remains an icon and a legend, one of the best voices in rock. And for that, she doesn’t have to do anything else. But sometimes we wish she wouldn’t bother.

Email ThisBlogThis!Share to TwitterShare to FacebookShare to Pinterest
Labels: 1986, pretenders