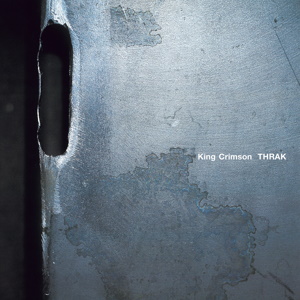 After the disbanding of the ‘80s version of King Crimson, Fripp kept busy with the occasional magazine article and collaboration, but mostly with a course called Guitar Craft, wherein many of the philosophical disciplines he’d come to champion were combined with a method of playing, notably using a new tuning he’d devised. (He would record and tour with some of the more proficient practitioners as The League of Crafty Guitarists.)
The digital era gave him another reason to assess the legacy of King Crimson, resulting in remasters of the catalog and some archival digs in box set form. The big news arrived in 1994, with the announcement of yet another version of King Crimson. This time the ‘80s combo—each of whom had kept very busy in the meantime—was augmented by a second drummer (Pat Mastelloto, most famous for pounding the skins for Mr. Mister) and another Chapman Stick player (onetime Crafty Guitarist Trey Gunn) to balance Tony Levin. This “double trio” format managed to contain enough elements of each previous incarnation of the band to earn the right to use the moniker.
The new album was preceded by a self-produced EP, which would recur down the line, and also confirm Fripp’s belief that the least label interference was best for him. Vrooom (sometimes rendered in all caps) is mostly a first draft, teasing listeners with the potential of the band as they jam towards a result.
Thrak (also occasionally given the all-cap treatment) is a much more polished and better balanced program, building on the foundation of Vrooom. It begins the same way, with a quiet rumble and crashing in on the pounding theme of “VROOOM”, beginning with a melody right out of Red and pausing for a few fingerpickings. The second half of the track is now “Coda: Marina 475” ever descending to its end. The glorious sound of Mellotron strings heralds “Dinosaur”, the first vocal appearance of Adrian Belew (and very Lennonesque one at that) and a terrifically catchy should-have-been-a-hit. The Mellotron reappears halfway through in a suggestion of Barber’s “Adagio For Strings”, setting up a false ending before the chorus reappears. “Walking On Air” is another radio-friendly tune, with a lovely backwards-sounding solo. “B’Boom” is mostly a drums solo leading into the title track, another insistent riff.
The second half of the album is more vocal-oriented: the two halves of “Inner Garden”, the driving funk of “People” (which really takes off in the last couple of minutes’ solo), the slinky “One Time”, and the Peter Gabriel-ish “Sex Sleep Eat Drink Dream”. “VROOOM VROOOM” and its coda provide more variations on the opening salvo, bringing things nicely full circle.
By tempering Adrian’s voice (or piling more sound around him) the ‘90s Crimson seems to rock more than ever, pretty much picking up where the band left off in the ‘70s, without relying so much on the electronics of the ‘80s. They certainly sounded like they were having fun, and now that they had the technology, many of the concerts performed by the double trio would become available for purchase directly from Fripp’s website, while a few would get wider release. B’Boom and Vrooom Vrooom present performances from each end of the lengthy tour respectively, while Thrakattak is basically a bunch of improv experiments from various shows, chopped and mixed Zappa-style. (For even more fun, a box set devoted to the lifespan of the double trio contains 12 CDs, two DVDs, and two Blu-rays, presenting just about everything they recorded in the studio and several things captured onstage over the space of four years or so. Meanwhile, the 40th Anniversary Edition of the album stuck with the album as released, but piled various mixes onto the DVD. The streaming version adds only the single edit of “Dinosaur”.)