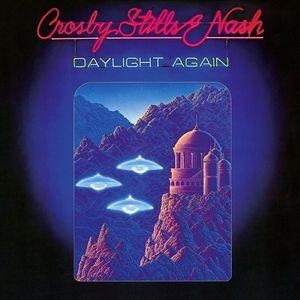 The story behind Daylight Again is, basically, Crosby was getting too far gone to be a viable partner in the CSN law firm. However, when Stills and Nash started working together without him, various powers that were suggested that maybe something couldn’t be done to make it seem like the three Laurel Canyon musketeers were right there together in one place, and thus facilitate at least a top 40 album, if the top ten was to be considered too greedy. Even if you weren’t an ‘80s record executive, such logic would make sense. Besides, these guys weren’t doing much on their own anyway. A five-year gap since the last CSN album was nothing compared to the chasm that separated Déjà Vu and CSN, as if anyone was paying attention to any of the solo albums that had sprouted up in the same time.
Stills had been working with a guy named Michael Stergis, whom, despite his songwriting and instrumental credits all over Daylight Again, doesn’t seem to have parlayed that into anything worth creating a Wikipedia page over. “Turn Your Back On Love” is about as bland yet inoffensive as we might hope from Stills at this point. “Wasted On The Way” is Nash’s subtle summary of the previous ten years, all high harmonies lamenting what could have been. Despite itself, “Southern Cross” is the highlight of the album, a simple acoustic strum evoking both the tranquility of the sea and “Back In Black”, which it resembles chord-wise. (Go ahead; listen to them back to back, and damn, if they don’t mesh perfectly.) Nash gets tough on “Into The Darkness”, sung to the syncopation of a basic riff, but it’s eclipsed by one of the Crosby songs he’d actually managed to finish. “Delta” is a positively gorgeous song, proving that even at his least coherent, he had the gift of song. It always seems more of an epic than it is.
Stills was still writing songs, so we get the back-to-back splendor of “Since I Met You” and “Too Much Love To Hide”, both of which are far more interesting musically than they are lyrically; in fact, Nash’s enthusiastic harmonies only underscore how average these songs really are. “Song For Susan” is hardly a substitute for “Our House”, but Nash puts a lot into it, so it’s a good effort. Stills finally slows down long enough to remind us that “You Are Alive”, a good setup for Crosby’s only other contribution, a cover of “Might As Well Have A Good Time” by a couple of fellow travelers. It’s pretty, which helps. To bring everything back home, the title track is basically a new intro welded to the front of “Find The Cost Of Freedom”, now with Art Garfunkel helping out (according to the credits, but good luck picking him out) just in case Crosby couldn’t cut it.
The usual suspects are all here—Joe Vitale, George “Chocolate” Perry, Craig Doerge, Michael Finnigan. The credits also list other vocalists on several tracks, covering up the initial and general absence of Crosby. Meanwhile, he and Nash don’t add anything instrumentally to the album, underscoring just how non-collaborative Daylight Again was. It’s not a bad album, but it certainly isn’t very exciting. Those two singles were successful enough to send the boys on the road, which resulted in the Allies live album, which was released very quickly compared to usual pace. It included two studio tracks: the hideous “War Games” and “Raise A Voice”, the latter of which would one day be appended to Daylight Again with three other outtakes of vague interest.