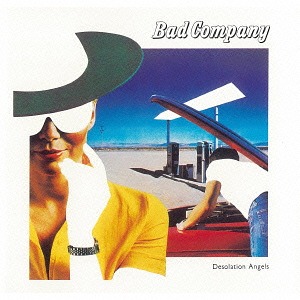 In 1979, bands with swaggering lead singers and guitar heroes had already been dubbed “boring old farts” by the protagonists of punk. However, punk had already given way to new wave, and the bands they’d tried to destroy were still doing brisk business in arenas. The likes of Foreigner, Kansas, Boston, and Journey managed to hold off the threat, and Bad Company proudly rode beside them.
Desolation Angels arrived a full two years after the undercooked Burnin’ Sky, led off by the effects-ridden “Rock ‘N’ Roll Fantasy”. To give any song this title is to begin behind the count, but it supplied enough boogie to make it an FM radio staple, so their reputation stayed intact. From there, the rest of the album delivers in ways that its predecessor didn’t. “Crazy Circles” takes a basic strum but adds enough complimentary sections to keep it from becoming dull, and “Gone, Gone, Gone” is reason enough to keep Boz Burrell as a songwriter, staying just this side of cliché. Despite its ordinariness (and more synthesized drums), “Evil Wind” keeps the momentum going, thanks to a decent bridge, and “Early In The Morning” nicely provides a lengthy side-closer that doesn’t strive to be “epic”.
“Lonely For Your Love” is a barely disguised carbon copy of “Can’t Get Enough”, but it’s immediately wiped away by the better pastiche of “Oh, Atlanta”. Outside of some of the lyrics, the harmonica and chicken-pickin’ guitar, there’s nothing truly Southern about the song, but it’s still a good one. The rest doesn’t match that apex; “Take The Time” is Badco by numbers, and the discofied “Rhythm Machine”, one of the blandest tributes to the blues, doesn’t do Boz Burrell any favors in the songwriting category. “She Brings Me Love” fades in on an extended three-chord motif, and adds backing vocals (credited to The Bones, whoever they were) and fake strings to simulate a Big Ending.
Beyond that, the worst thing we can say about the album is the arbitrary cover art, typical of Hipgnosis, their workload being unhampered by Pink Floyd, 10cc, or even Wings. Desolation Angels is a good case of the whole bettering the parts; it kept the band afloat, and secured them a further stay on the otherwise desolate Swan Song label. (While it just missed the 40th anniversary, the expanded version of the album came loaded with a disc’s worth of extras and then some, including alternate versions of all the songs on the album—multiple in some cases—plus two more versions of “Smokin’ 45”, two extended jams, and an a cappella rendition of “Amen” for some reason.)