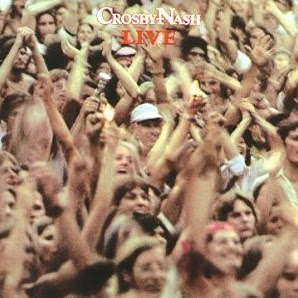 Presumably to cash in on the reunited CSN’s success, the mustachioed majority of the triad found themselves on a live album to cash in on their time away. Crosby-Nash Live appeared only months after CSN, offering a grab bag of performances from two tours backed by the same guys keeping busy until James Taylor or Jackson Browne called. While the album does offer glimpses of a Crosby yet to be completely derailed by drugs, this duo really weren’t meant to rock. (Well, maybe Crosby, but certainly not Nash.) The best moments are the quietest ones—“Simple Man”, “Page 43”, for example—than the revved-up renditions of “I Used To Be A King”, “Lee Shore” and “Déjà Vu”, the latter of which sounds like they were trying to emulate Miles Davis (whose Bitches Brew-era recording of “Guinnevere” was still in the vaults at that time).
The best live albums show performers in their best element, or at least enhance the songs known inside and out from their studio albums. While not a complete waste of vinyl, Crosby-Nash Live doesn’t fulfill either goal.
Many years later, after their other ABC albums got the digital treatment, Crosby-Nash Live was duly remixed and remastered, and bolstered by two more Crosby performances: a welcome “Bittersweet” and the mega-rare “King Of The Mountain”, which begins with an exploratory, occasionally atonal piano solo, and continues to fight against it. 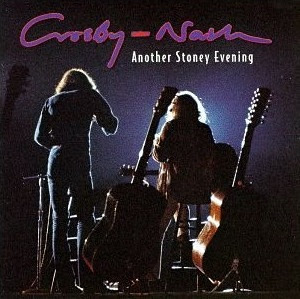 Before that, however, proof for why we should care about these guys—and why their shows were widely bootlegged in the good old days—arrived via a surprising source. Released in the late ‘90s on the Grateful Dead label, of all things, Another Stoney Evening presented a show similar but not identical to a notorious 1971 bootleg. This is “wooden music” start to finish, the boys strumming songs together and apart, some of which the crowd knew from the CSN albums and their solo albums, and some that hadn’t made it to an album yet. Therefore we here virtual premieres of “Where Will I Be”, “Stranger’s Room”, “Southbound Train” and “Immigration Man”. In-jokes aside, it’s a very intimate show, with none of the sterility of that other live album.