Traffic 7: Shoot Out At The Fantasy Factory 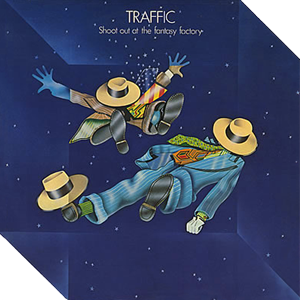 Another album, another lineup—but as long as Steve Winwood, Chris Wood and Jim Capaldi were around, it was still Traffic. Outside of its cover design, Shoot Out At The Fantasy Factory doesn’t share much more with its predecessor; for one, the Muscle Shoals Rhythm Section fills up the back, while Reebop thumps along happily on his congas. Overall, it sounds more slick, not folky enough, and generally dull.
The title track crashes out of the gate, with a few nasty guitar riffs, establishing a groove but not much else. Oh, except for the police siren halfway through. Apparently Stevie just wanted to jam, and he does. That’s six minutes right there, and the rest of the side is given over to “Roll Right Stones”. This one begins with a pretty piano part, over which Stevie “doo-doos” wordlessly, then the track goes in another direction for the verse. There’s a lengthy jam over the chorus, where Chris Wood gets to put his sax through a wah-wah again, to a flatulent degree, and right about where you think it should fade, it goes back to another verse. Where “The Low Spark Of High-Heeled Boys” mesmerizes, this just refuses to end.
“Evening Blue” tries to recall the folkier moments of their catalog, but for the damn congas mixed so high. “Tragic Magic” is a showcase for Chris Wood, neither tragic nor particularly magical. Don’t bother waiting for the lyrics, because there aren’t any; instead, there’s a big horn section to drive to the quick (after six minutes) fade. And with another flourish of the congas, perhaps the album can be summed up best by the final track. A title like “(Sometimes I Feel So) Uninspired” is a carrot for any critic, but it’s saved by the chords and performance, and there’s the general impression that they’re trying to impress. Here, finally, toes will tap for the first time since the beginning of side one.
One desperately wants to like Shoot Out At The Fantasy Factory, but the players don’t make it easy. Sure, the album sounds great, but unfortunately smooths over any grit that could keep it from being a little bland. Except for the title track, everything is in the same moderate (read: not fast) tempo, and the famed funky rhythm section seems to exist just to keep time. Maybe those stereotypes about Jamaica are accurate. Jim Capaldi can sure shake that tambourine, though.
The expanded band toured, with Barry Beckett playing extra keyboards, and released a live set later in the year. On The Road presents lengthy, slightly faster versions of six already lengthy songs over two records (except in America, where it was edited a single LP, but that’s been rectified for the CDs). There’s not much of an improvement on the studio versions, unless a 20-minute version of “Glad” and “Freedom Rider” or 17 minutes of “Low Spark” excite you. “Tragic Magic” isn’t bad, but “(Sometimes I Feel So) Uninspired” is all too apt until Stevie lets it rip on the guitar after the last vocal.

Email ThisBlogThis!Share to TwitterShare to FacebookShare to Pinterest
Labels: 1973, traffic