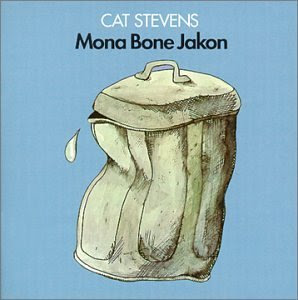 After a mild ripple on the pop scene, medical issues forced Cat Stevens to lay low for a while, and he wouldn’t emerge until the new decade. When he did, the sensitive singer-songwriter of the ‘70s and all the alliteration that went with it had emerged, and his next work left behind the ornate trimmings of his first two albums. Mona Bone Jakon presented a new Cat Stevens, decidedly acoustic, but occasionally rocking with a piano leading the combo. When strings appear, they are very sympathetic. Best of all, his gruff voice fits the format much better. (Shall we thank producer Paul Samwell-Smith, formerly of the Yardbirds?)
Not for the last time, he comments on his chosen vocation halfway through side one; “Pop Star” is a repetitive blues that shows just how ill-suited he was for that life, between the litanies of ritual tasks and scatting a horn riff for actual instruments to repeat. Much better are the songs that, well, sound like Cat Stevens. “Lady D’Arbanville” is a little over-dramatic, and today steers to close to a Gipsy Kings arrangement, but “Maybe You’re Right” and “Trouble” are thoughtful strums, and “I Think I See The Light” is based around a rolling and rocking piano.
However, the kid was still finding his way. The title track doesn’t last long or do much, and today is not the time to ask if it’s about his genitalia. “I Wish, I Wish” is forceful in its doubt, while “Katmandu” provides a mystical landscape to fit his image as a global troubadour. (And yes, that’s the Peter Gabriel on flute.) “Time” amounts to a relatively brief sonic experiment, a profound interlude before the gentler “Fill My Eyes” and finale of “Lilywhite”. An extended coda of strings wafts gently away towards the center to the label.
This is the real Cat Stevens debut, though what the dented, seemingly tearful trash can on the cover has to do with anything is beyond the scope of this forum. Rather, Mona Bone Jakon is a pleasant collection of songs, and a better place to start.