Rush 5: All The World’s A Stage 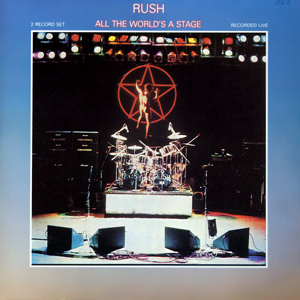 In the ‘70s, bands released double live albums. It was the law, and we can count on one hand the bands that didn’t conform.
For all their individual philosophies, Rush followed rules, and so All The World’s A Stage captures them in the wake of 2112 in front of an appreciative hometown crowd. They wisely begin with some of their more compact radio hits—“Fly By Night” somehow melding into “In The Mood”, complete with cowbell. The dynamics within “Lakeside Park” make a good transition to the abbreviated performance of the “2112” suite (which is just as well, since it’s unlikely they would have allowed Alex Lifeson to tune his guitar at length to approximate the “Discovery” section). Besides, they had to make way for twelve minutes’ worth of “By-Tor And The Snow Dog”. A medley of “Working Man” and “Finding My Way” sets up a five-minute drum solo by Neil Peart, introduced by Geddy Lee as “The Professor”. Throughout, the sound is clean, Geddy’s Rickenbacker punching through the mix and the crowd’s cheering and whistling. If there’s an embarrassing moment on the album, it would only be the final seconds where we can hear the band “congratulating” each other for a great show, and slamming a door.
The band viewed All The World’s A Stage as a transition to their next chapter, which would likely be revealed soon enough. For now, they seemed to have found their way.

Email ThisBlogThis!Share to TwitterShare to FacebookShare to Pinterest
Labels: 1976, rush