Cat Stevens 4: Teaser And The Firecat 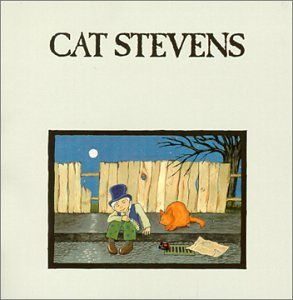 Keeping it simple as ever, Cat Stevens’ finest album is an exercise in less-is-more. Teaser And The Firecat is even better than its predecessor, with ten singable, strummable songs and a minimum of decoration. In fact, with so many of these songs being so well known, a review of our usual depth seems moot, but we’ll try.
“The Wind” sets the tone, two verses for two guitars, and just like that it’s over. “Rubylove” floats in, almost as simple, with trilling bouzoukis and even a verse in Greek. “If I Laugh” is a little sensitive, but wins for the intricate picking on the bridge. One wonders if there were three earlier attempts before he got to “Changes IV”, and if they were as noisy, but few songs are as gentle or, again, as simple as “How Can I Tell You”.
Something of a calypso feel permeates both “Tuesday’s Dead” and “Bitterblue”, but for variety, they’re separated by an actual hymn. He didn’t write “Morning Has Broken”, nor did he play the piano that punctuates it, but it’s easily one of his most recognizable songs. The same can be said for the litany of optimism that is “Moonshadow”. “Peace Train” would cause a lot of misery for 10,000 Maniacs in the late ‘80s, but for now it’s just a simple plea and nice metaphor with a hint of strings. And make sure you’re listening to the album version, which has a subdued coda featuring a faded strum.
Others may prefer Tea For The Tillerman over Teaser And The Firecat, but since they’re short, you can get ‘em both. They easily fit on a 90-minute Maxell tape with room to spare, or can even be burned to the same CD-R. (Of course, the eventual Deluxe Edition presented an alternate, shuffled version of the album, comprising five demos and five live recordings from as early as 1971 and as late as 2007.)