Pretenders 7: Last Of The Independents 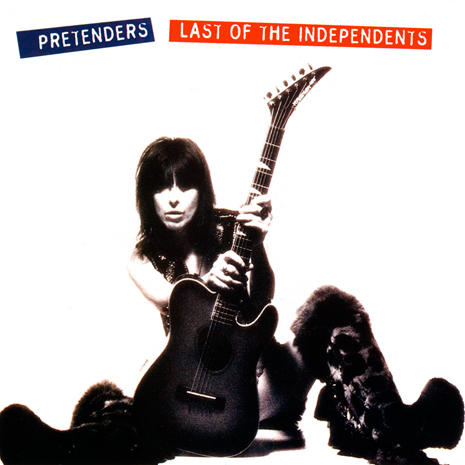 Just as Britpop started to make straight rock popular again in the aftermath of grunge, Chrissie Hynde came across another guitarist up for the impossible task of filling James Honeyman-Scott’s shoes in another incarnation of the Pretenders. Martin Chambers seemingly returned to the fold as well, but a closer look at the credits on Last Of The Independents proves that it’s yet another collection of disparate recordings from different sessions with other rhythm sections (including another refugee from the Smiths). The only constant is Chrissie herself, whom we see right there on the cover.
The sound of the first single, the unabashedly debauched “Night In My Veins”, had pundits declaring it a comeback, but the big hit was the power ballad “I’ll Stand By You”, and it’s between those poles that the album lies. The result is not unpleasant, but hardly indispensible, especially when co-written with ‘80s hit machine Steinberg and Kelly.
The opening sequence of “Hollywood Perfume”, “Night In My Veins” and “Money Talk” is comforting, since the songs all rock, and even the slowdown of “977”, both musically and vocally an homage to John Lennon’s Plastic Ono balladry, is hardly a sentimental tale of a violent lovers’ spat. The hippie social commentary in “Revolution” (not the Lennon song) is where things start to slide to the wimpy, though “All My Dreams” does feature the new “official” lineup of the band and, unfortunately, a spoken monologue.
People who bought the album on the basis of “I’ll Stand By You” may have been jarred by what follows immediately. “I’m A Mother” is a feminist rant set to a danceable Manchester beat thrown off by her tuneless howl of the title and some riffing in a different key. Much more interesting and equally maddening is the snippet of “Tequila”, a country lament that predates the first album. After one lonesome verse it’s superseded by the opaque “Every Mother’s Son”. The rockabilly of “Rebel Rock Me”, complete with hiccupping vocal, recalls “Thumbelina”, possibly the least essential song from her last good album, then we get another by-numbers Steinberg/Kelly collaboration in the way of “Love Colours”. And for some reason she chooses to end the “comeback” with a tepid cover of Dylan’s “Forever Young” (yes, the slow version).
Last Of The Independents is not a bad album, but it’s not what we want from Chrissie. To which she’d likely retort with a string of obscenities, and she’d be right. We’re waffling over whether it should be docked half a point, so watch this space for changes.

Pretenders Last Of The Independents (1994)—3

Email ThisBlogThis!Share to TwitterShare to FacebookShare to Pinterest
Labels: 1994, pretenders