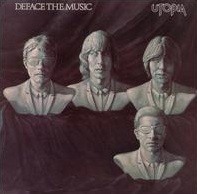 So you know how Utopia had been approaching ordinary, radio-friendly music with each release? Well, who could have anticipated that their next move—or gimmick, if you will—would be an album of Beatle sound-alikes so uncanny they rival those of the Rutles?
The cover art is subtle, but Deface The Music is very much an homage to the Fabs, right down to the simple “more Utopia albums for your collection” ad on the inner sleeve. We’re not going to pick out every reference, but suffice it to say, these tracks scream moptop, with only Todd Rundgren’s nasal delivery keeping it oceans away from a bona fide British invasion.
The album’s sequenced chronologically, so to speak; side one is a celebration of 1964, from “I Just Wanna Touch You” all the way to “That’s Not Right”. The sound even apes early Capitol full dimensional stereo, with the drums and bass on one side and the other instruments on the other. The flute sound on “Alone” isn’t going to fool anybody, though; that’s neither the real thing nor a Mellotron. But what do you expect from a band that includes computer genius and synthesizer pioneer Roger Powell?
“Take It Home” closes side one with a hint of Rubber Soul, then “Hoi Polloi” kicks off side two in a mild aping of “Penny Lane”. “Life Goes On” will seem like a reference to a certain Revolver track about a spinster, but there’s a Utopia precedent already in “Love Alone” from the previous album. “Feels Too Good” even combines “Getting Better” with “Fixing A Hole”. Rather than taking it all up to Abbey Road, “Everybody Else Is Wrong” celebrates everybody’s favorite Lennon songs from the Magical Mystery Tour album, which both echoes Faithful and predicts that Todd would meet XTC one day. All it’s missing is a fake ending, confounding expectations yet again.
With only two songs out of thirteen over three minutes, Deface The Music goes by quick, but that just gives you more time to play it again. Chances are, you will.