Pretenders 8: The Isle Of View 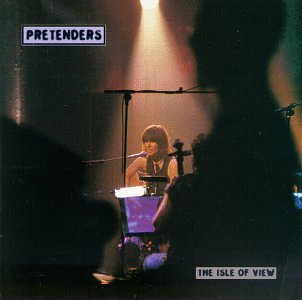 Having returned to the charts, Chrissie Hynde and her latest Pretenders lineup were in prime position to be tapped for an “unplugged” television show. They could have simply played the songs acoustically, but instead, the band chose to be joined throughout on most songs by a string quartet. They also set up in the round, playing to each other, while the audience looked on from a distance.
Both the TV show and subsequent album were given the punning title The Isle Of View, though the sequences aren’t identical, and the CD doesn’t include two of the better performances: the recent hit single “Night In My Veins” and her cover of Radiohead’s “Creep”. (As for the “title track”, it’s merely a brief lush instrumental by the quartet with seaside effects, stuck at the end of the disc.)
Those omissions aside, it’s a very entertaining listen, touching on every one of the albums in equal measure, and not always relying on the more familiar ones. “Sense Of Purpose” and “Criminal” are rescued from the obscurity of Packed!, just as “Chill Factor” is better served in this format than the faux-soul of Get Close. “Kid” is slowed down to a near-lullaby, while “The Phone Call” maintains its broken-leg menace. Damon Albarn, then riding high with Blur, is trotted out to play piano on “I Go To Sleep” (take that, Oasis).
The Isle Of View is a good way to spend an hour, and goes a long way to re-establishing Chrissie as both a superb vocalist as well as a songwriter of note. Even better, with her voice up front and the songs given space, it’s possible to finally understand the words to the songs. Some of them, anyway.

Email ThisBlogThis!Share to TwitterShare to FacebookShare to Pinterest
Labels: 1995, pretenders