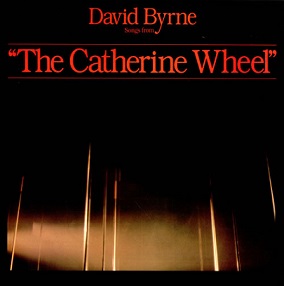 In a year that already saw a full-fledged Talking Heads album and a strict collaboration with Brian Eno released, David Byrne upped his autonomy by completing a score for a Twyla Tharp ballet. Not being connoisseurs of the form we aren’t about to make any opinions about the production itself, but the music from The Catherine Wheel is still accessible, in both senses of the word.
In a forward-thinking move, The Complete Score From The Broadway Production Of “The Catherine Wheel” was initially available on cassette, while the LP, being the standard of the time, was about half the length and titled Songs From The Broadway Production Of “The Catherine Wheel”. Leaning more on vocal tracks (read: songs) and contributions from Jerry Harrison and surrogate members Bernie Worrell, Dolette McDonald, Steve Scales, and Adrian Belew, it sounds more like an actual Talking Heads album. “His Wife Refuses” burbles in on a good rhythmic pulse before escalating into a nervous portrait of suburban hell. “What A Day That Was” is probably the best-known track here, due its appearance on a future album, though his voice is just off-pitch here to be grating. “Big Blue Plymouth (Eyes Wide Open)” follows the same groove, but has better vocals, sounds less like a demo, and is more successful. “Poison” and “My Big Hands (Fall Through The Cracks)” are both fairly funky, and welcome his discovery of his “swamp” voice, while “Big Business” (sense a theme here?) manages to sound very European new wave, even with the wonderful clavinet.
A few strictly instrumental pieces balance the album. “Two Soldiers” starts as a wonderfully dramatic theme, but picks up the same rhythm of the previous track to dispel any doom. “The Red House”, with its frenetic percussion and sampled voices, is a close cousin to My Life In The Bush Of Ghosts; “Eggs In A Briar Patch” is a more distant relative, as a more straight backing, and more driven by Brian Eno’s contribution. “Cloud Chamber” isn’t the only ambient piece in recorded history to use metal percussion to convey that image, but is effective, just as “Light Bath” is quiet and soothing.
Once the CD (and now streaming) became the way to go, The Complete Score superseded the LP version, and now provides a more seamless experience, with the addition of several instrumentals. Highlights include “Ade”, a nice poppy collaboration with Eno, “The Blue Flame”, which Peter Gabriel must have heard, “Dense Beasts” into “Five Golden Sections”, and the “Under The Mountain” and “Dinosaur” sequence. “Light Bath” now opens and closes the whole suite, framing it nicely. Again, there might be too much here for people just wanting the tunes, but there’s a good flow, and we have to give him more credit than we had previously.

David Byrne Songs From The Broadway Production Of “The Catherine Wheel” (1981)—3
The Complete Score CD and cassette: same as 1981, plus 22 extra tracks