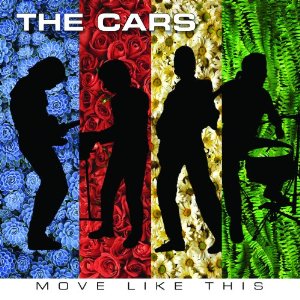 After literally decades of avoiding the nostalgia train—and the “New Cars” project that paired Elliot Easton and Greg Hawkes with Todd Rundgren, Kasim Sulton, and Prairie Prince doesn’t count—Ric Ocasek apparently wrote a set of song that he decided would sound perfect if played by the old guys. David Robinson was contacted, and the Cars, now a quartet in the absence of the late Ben Orr, were back. For a while, anyway.
Move Like This isn’t going to supplant any of the original series, with the possible exception of Door To Door, but that at least had “Strap Me In” on it. These tracks are very evocative of their classic sound, with percolating synths that recall Devo, steady drums, lots of guitars, and those omnipresent harmonies. Ric’s voice is certainly older, and doesn’t have that goofy quality he used to promote (though that doesn’t keep him from sounding like Goofy on some of the slower tunes). The production was split between the band and Jacknife Lee, when he wasn’t busy with U2 and R.E.M.; Ric and Greg are both credited with playing bass, whether programmed or stringed.
“Blue Tip” (the opener), “Free”, and “Sad Song” are possibly the best tunes, with riffs right off the first couple albums, and sardonic lyrics. “Hits Me” actually mentions Ric’s resemblance to Ichabod Crane. The aforementioned slower songs, “Soon” and “Take Another Look”, aren’t always as convincing; maybe if Ben were around he could have added his croon.
As reunions go, Move Like This is far from embarrassing. The band played a handful of shows to promote it, and that was it.

Email ThisBlogThis!Share to TwitterShare to FacebookShare to Pinterest
Labels: 2011, cars