Phil Spector: A Christmas Gift For You 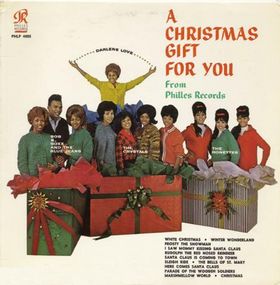 While his name today generally is associated with a murder conviction or how he ruined “The Long And Winding Road”, Phil Spector really did make an impact on rock ‘n roll in his time. His “wall of sound” made dozens of instruments sound terrific on AM radio (in glorious mono) no matter who was singing. Brian Wilson used the same musicians and studio for his albums, and even Bruce Springsteen knew that he needed the Spector approach to make “Born To Run” the anthem that it is (which indirectly led to Meat Loaf and Bat Out Of Hell). But if Phil Spector did nothing else, he put together one hell of a Christmas album.
A Christmas Gift For You follows on the formula that drove “Be My Baby”, “Da Doo Ron Ron” and dozens of other hits. Spector knew what worked and he did it to death (sorry), depending on repeated rhythms and musical motifs. This album is just like those singles; even though there’s a prominent sleigh bell in the percussion, it’s mixed just as high as the castanets and tambourine. On every track, all secular pop standards, you can hear Teenage Steve Douglas honking away on sax, Leon Russell’s piano octaves, Hal Blaine’s thundering drums (and we assume it’s him doing the clippity-clop effects on “March Of The Wooden Soldiers” and “Santa Claus Is Coming To Town”). Jack Nitzsche is credited with the arrangements, so thank him for such touches as the 12-string that opens “Rudolph the Red-Nosed Reindeer”, the “Heat Wave” vibe on “Sleigh Ride”, and even “I Saw Mommy Kissing Santa Claus”, which begins with a sweet intro culminating in a loud smooch before barreling through the song, ending with a quote from “Rock-A-Bye Baby”. “Winter Wonderland” ends with “Jingle Bells”, “Marshmallow World” with “Deck The Halls” and so on.
Partially because of the tight rein Spector had on his roster, his main milieu was the single, not the album. So rather than have one artist carry the whole thing, A Christmas Gift For You rotates between Darlene Love, the Crystals, the Ronettes and the unfortunately named Bob B. Soxx & The Blue Jeans. Darlene leads off the program with “White Christmas”; already tackled doo-wop style by the Drifters, this adds a spoken bridge acknowledging what the holidays are like in “sunny L.A.”, far from the snow witnessed by the album’s listeners. She sings a total of four numbers, the winner being “Christmas (Baby Please Come Home)”, the only “original” song on the album, thankfully revived by U2’s version 25 years later.
While Darlene had arguably the best voice, Phil Spector was obsessed with Ronnie Bennett and without a doubt, her beehived, eyelinered delivery of “Fwawsty Da Snow Ming” (to the best of our phonetics) is guaranteed to stir the red blood of any teenage male. The other Ronettes provide the delicious “dinga-linga-linga-ding dong ding” on “Sleigh Ride”. The Crystals hold their own (“Santa Claus Is Coming To Town” is the arrangement Springsteen made standard, and we’re still wondering what “elephant boats” are) and Mr. Soxx doesn’t stick around long enough to bother anybody.
A lot of the intros are interchangeable, but so what? If you don’t like this album, you’re a Communist. There’s no need to describe every track since you’ve heard them already. Several songs appear in Goodfellas, which is probably playing on Spike, FX or AMC right now. Apparently it was not a huge hit in its time, but it’s stayed in print all through the years, first on the Beatles’ Apple label, then through Rhino, ABKCO and now on Sony. It’s still 35 minutes long, and it’s still in mono. The way it should be.

Email ThisBlogThis!Share to TwitterShare to FacebookShare to Pinterest
Labels: 1963, xmas