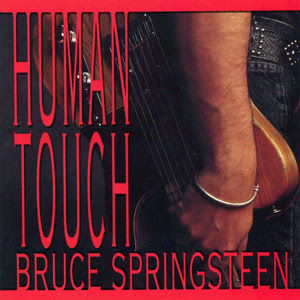 Bruce had begun working on his follow-up to Tunnel Of Love soon after the end of the tour supporting it. In the meantime, his marriage ended, he took up full-time with Patti Scialfa, they started having kids, and he fired the E Street Band. (Roy Bittan was the exception, but he wasn’t an original member anyway.)
After about two years of recording in virtual secret (as Al Gore hadn’t invented the Internet yet) with hired guns, he was on his way to having something ready. Then he wanted to write just one more song to finish it off, and ended up writing ten. So instead of combining the best, he released both sets as separate but similar entities, on the same day, mere months after Guns ‘N Roses had done the same thing. However, this was not a case of Jersey Illusion I and II. While Bruce’s albums shared similar design elements, they weren’t parts one and two of the same stew. A sizable gap between albums being part of the Springsteen experience, the result was usually that the finished product was worth the wait. But nothing is a given in the record business, and Bruce was suddenly in the position of finding out who his true fans really were.
Human Touch was that mostly completed album, and it’s easy to see why he sat on it so long. The title track is an engrossing six minutes, and a good demonstration of simplicity working in his favor. But “Soul Driver” is sunk immediately by keyboards that were already dated in 1992, and a melody he’d already used for a song he gave to Gary U.S. Bonds a decade earlier. (Like other tracks here, it sports a Sam & Dave vocal arrangement, with the bonus here being that it actually is Sam Moore singing his part.) “57 Channels (And Nothin’ On)” is the type of song that would have gotten airplay as a non-album B-side; here, the novelty plot takes up space. “Cross My Heart” is a simple song sent askew by a bluesy solo that takes it away from whatever romantic sentiment is meant in the lyric. Likewise, “Gloria’s Eyes” misses its potential with a generic backing. However, “With Every Wish” shows what he could do with other musicians, as the backing here is provided by three veterans of the ECM and Windham Hill labels, and it’s quite soothing. Then “Roll Of The Dice” crashes in, but since it’s a by-now welcome return of the E Street sound, it’s a great return to form.
It’s tempting to say the same for “Real World”, but’s it’s pretty much the same song, except for that ridiculous bell that clangs every eight beats in place of the glorious Bittan piano. “All Or Nothin’ At All” builds on the rockabilly beloved by “Pink Cadillac” without going anywhere, while “Man’s Job” is a passable expansion of a cliché. Speaking of which, “I Wish I Were Blind” isn’t a new sentiment, but his lyric is an excellent update. Here the duet vocal comes from Righteous Brother Bobby Hatfield. (And if you get tired of waiting for the song to fade, you can always repeat the closing choruses of “Science Fiction Double Feature”, which is always fun.) “The Long Goodbye” is an apt title for a song with two more after it, but at least it’s not as canned sounding as “Real Man”, which comes across as a Springsteen parody. The closing “Pony Boy” is basically a lullaby to his new baby son, and while it’s nice, it’s also superior to most of what has gone before.
Ultimately, Human Touch is a dull album, which is a shocking statement to say about Bruce Springsteen. It’s also an hour long, proving that he hasn’t always been his best editor. The handful of bright spots does keep it from being a complete waste, and besides, there was another album to consider.