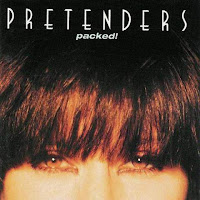 The cover has the classic band logo, but the close-up shot of Chrissie Hynde’s trademark bangs and eyeliner should be proof that Packed! is a Pretenders album in name only, despite the instrument setup shown on the back. The only other member present is drummer Blair Cunningham, who joined up at the end of the last album; most of the tracks pick from a pile of players, including Rockpile’s Billy Bremner and producer Mitchell Froom, whose usual noisy production style takes a backseat here.
The focus is back on straight rock, thankfully, with a little pop influence for the more romantic tracks. “Never Do That” is a nice jangly tune with catchy verse and chorus, except that it’s basically a straight rewrite of “Back On The Chain Gang”. The pleading “Let’s Make A Pact” keeps her vulnerability upfront, continuing from the softer side shown on the last album. Her hackles raise a little on the galloping “Millionaires”, proof that she shouldn’t yodel, and “May This Be Love” is another unnecessary cover of a more obscure Hendrix tune. “No Guarantee” provides some welcome kick, but all goes quiet again on “When Will I See You”, co-written with Johnny Marr, which only adds insult to the injury that he didn’t stick around to collaborate on the whole album.
“Sense Of Purpose” would be a hit single in a just world, just as the same world would have mixed out her over-excited interjections in the third verse and at the end. “Downtown (Akron)” gallops along with little to say, and the cod-reggae of “How Do I Miss You” comes too close to the Marr collaboration three tracks early. “Hold A Candle To This” revives some of the snottiness of the early albums, but “Criminal” goes back to being sensitive and wistful.
Even despite the cover design, Packed! more accurately described how full the boxes of returns were. The album was ignored upon release, despite its scattered qualities, though a couple of the songs would remain in her repertoire down the road. It’s recommended for being better than Get Close, but still lacks any real memorable hit.

Email ThisBlogThis!Share to TwitterShare to FacebookShare to Pinterest
Labels: 1990, pretenders