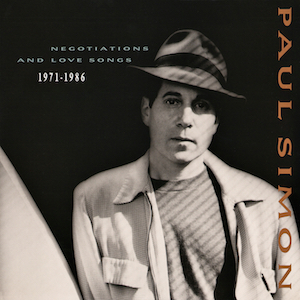 His label had to have been relieved by the massive success of Graceland, and knowing the man’s measured pace while creating his next likely masterpiece, Warner Bros. made the commercially wise move to issue a hits compilation. Granted, Paul Simon had only one “hit” from the two albums with the label that weren’t Graceland, so they bolstered Negotiations And Love Songs—helpfully subtitled 1971-1986—with nine selections that were already on his previous hits album plus, oddly, “St. Judy’s Comet”. (We’d also gladly take “I Do I For Your Love” over “Have A Good Time” any hour of any day, but nobody ever asks us.)
That covered the ‘70s, but what of the ‘80s? “Late In The Evening” was the logical choice to represent One-Trick Pony, sparing newcomers the trouble of picking that one up. Three of the better tracks from Hearts And Bones get welcome exposure; “Train In The Distance” even provided the set’s title. “Diamonds On The Soles Of Her Shoes” and “You Can Call Me Al” round out the program. (If you bought the two-LP version of the album, you also got the title track from Graceland.)
For a chronological overview, Negotiations And Love Songs covers the basics, with true highlights from his handful of albums to date, and not sneaking in any live versions of songs better known from his old duo. Also, with Greatest Hits, Etc. now out of print, this was the only place to find “Slip Slidin’ Away”. (If you wanted “Stranded In A Limousine”, for whatever reason, you were out of luck.) And who could resist that dreamy noir portrait of the artist with his fedora cocked at a jaunty angle?