Paul Simon 12: Concert In The Park 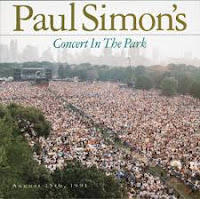 At possibly the peak of his solo career, Paul Simon returned to Central Park not quite ten years after his historic reunion with Art Garfunkel for another free concert. Artie was nowhere to be seen this time, but the multitudes in the park and watching on television wouldn’t have minded. And since he’d’ve been stupid not to, Paul Simon’s Concert In The Park arrived in stores not months later, just in time for holiday shopping.
The nearly two-hour show concentrated mostly on songs from Graceland and The Rhythm Of The Saints (which the tour was ostensibly promoting), with well-placed selections from his catalog. Given the international genetics of the band on the crowded stage (each member nicely profiled in the CD booklet), some of those oldies are transformed. “Kodachrome” begins with a bubbly bass and manages to hit on reggae along the way. With no Art around, and always anxious to remind people that he wrote it, “Bridge Over Troubled Water” is given a more blatant gospel treatment, also touching on reggae partway through. “Train In The Distance” and “Hearts And Bones” would appeal to those to bought Negotiations And Love Songs. Given his new Brazilian friends, “Cecelia” is spiced up a little over the original arrangement. Even “Diamonds On The Soles Of Their Shoes”, in the absence of Ladysmith Black Mambazo, gets an extended vocal intro and a raucous percussion ending. Naturally, the crowd goes nuts at certain lyrical references, like the New Jersey Turnpike, New York City winters, and smoking a J.
As with the Garfunkel show, one song from the concert was not included on the eventual album. Throughout the tour, he would often bring “You Can Call Me Al” to its expected close, only to say, “That was fun, let’s play it again”—and the band would. Such things work better in the moment, so the CD as released only includes the song the once.
Even counting the redundancies with his previous three releases, Concert In The Park works as a summation of his career, and a staple of many a CD collection. It was a good show, and a good tour, and he likely wouldn’t be this huge again.