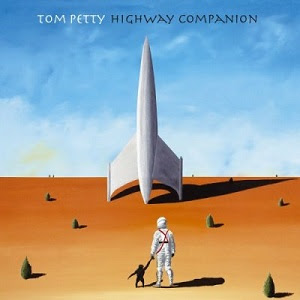 By now it should be clear that a Tom Petty solo album isn’t going to sound radically different from a Heartbreakers album, but we should still notice that they’re not around. His third such release, Highway Companion, at least restricts the guests to just Mike Campbell on lead guitar (naturally) and returns the producer credit to Jeff Lynne.
Thankfully, it doesn’t sound like a Jeff Lynne production, though with the drums handled by Petty himself—the jury’s still out on if they’re canned or live—it’s a moot point. “Flirting With Time” and “Ankle Deep” are the closest to that hit sound, though our hero’s voice is more off-pitch than ever. The homemade feel of the album is best displayed on “Jack”, which sounds like it took longer to play than to write, but it does have an excellent nod to Love’s “Bummer In The Summer” where the choruses should go. “Night Driver” has an intriguing mood, but it happens two tracks after he’d already threatened to “Turn This Car Around”.
Tom hasn’t been as prolific as he gets older, and we’re starting to think he either works better faster or has run out of new ideas. Unfortunately, there’s nothing that really leaps above the rest. There aren’t any home runs of the like that distinguished even such so-so albums as Long After Dark and Echo. To make matters worse, he’s even recycling his own songs; “Big Weekend” is “Yer So Bad” meets “To Find A Friend”, and “Damaged By Love”, pretty as it is, uses a Byrds song title as an opening line to disguise that he’s rewritten “Walls”.
Highway Companion could have been a lot worse, but it just isn’t memorable. It also wasn’t much of a hit, making the release a year later of a so-called “Special Edition”—two new songs plus demos of two album tracks—more insulting to diehard fans than anything else.